A short history of the Beads on One String Project 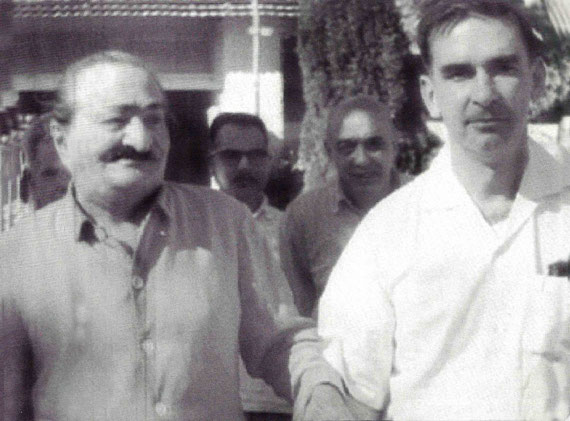 The Beads on One String Foundation is an evolving project connecting individuals and groups from diverse backgrounds, cultures and paths, on a spiritual quest to discover and celebrate the ‘Unity of All Life’…….‘Oneness’ is the key.

The origins and inspiration for this foundation are intrinsically linked with Avatar Meher Baba and His ‘Message to the West’, first given and recorded in London in 1932 by Pathe News. Emphasising the importance and subsequent universality of this message it appears, significantly, on the opening page of ‘God Speaks: The Theme of Creation and Its Purpose’..…written and first published by Meher Baba in 1955…..

“I am not come to establish any cult, society or organisation; or even to establish a new religion. The religion that I shall give teaches the Knowledge of the One behind the many. The book that I shall make people read is the key to the heart that holds the key to the mystery of life. I shall bring a happy blending of the head and the heart. I shall revitalize all religions and cults, and bring them together like beads on one string.”

These words inspired Don E. Stevens, a close disciple (mandali) of Meher Baba and editor of  ‘God Speaks’, ‘The Discourses’ and ‘Listen Humanity’, the first two of these in collaboration with Murshida Ivy O.Duce.

Don first met Meher Baba in New York in 1952, thereafter Baba would refer to Don as ‘my spiritual son’. Don was given an open invitation by Meher Baba to visit him whenever he was within a day’s reach of Meherabad; Baba’s home and ashram in central India. Now Meherabad is a place of international pilgrimage, with devotees from all over the world coming to pay homage to his tomb-shrine; The Samahdi.

Don’s first contact with Meher Baba was through ‘Universal Sufism’, brought to the West in the 1920’s by Hazrat Inayat Khan. Murshida Rabia Martin, Don’s Sufi teacher, was appointed by Inayat Khan to be his successor. After Inyat Khan’s early death, in 1927, Murshida Martin fulfilled her duty, to find a new spiritual master for the order. Her search was thorough and extensive, after meeting Elizabeth Patterson and Norina Matchiabelli, both early Western disciples of Meher Baba, Murshida Martin became convinced of His divinity and authenticity. She corresponded with Him in India and He agreed to become the Sufi Order’s new Master and Guide.

In 1952, after Murshida Martin’s death (1947), Meher Baba renamed the order; Sufism Reoriented and wrote a new Sufi Charter, with the assistance of the new murshida, Ivy O. Duce, and Don Stevens, who requested democratic principles be incorporated. Don’s frequent travelling, due to professional work in the international oil business, particularly in Europe and the East, enabled ongoing close contact with his spiritual Master in India.

Working with small, focused groups became a key element for Don, these groups first began to take shape in the USA, at the request of Ivy Duce, to help the spiritually curious young people, knocking at her door,  interested in discovering more about authentic mysticism and Meher Baba.

When Don  relocated to Europe in the late 1960’s he continued to lead many study groups in London, France and America. The structure for these groups was an evolving and revolutionary process, a departure from the traditional Sufi teacher/student format. Meher Baba’s ‘New Life’ was a  model for these groups, with companionship and the practice of spirituality within everyday life an essential ingredient.

‘The Inner Path for the New Life’ is an excellent primer, written by Don Stevens and friends, giving the history and working structure for these study groups. And in Don’s own words “…is equally valid for Christians, Buddhists, Muslims, Jews, Sufis, Vedantists and all the other great efforts to fulfill His Truth.”

Don would often tell stories of his time with Meher Baba. On one occasion he had been sent by Him,  with another close disciple, Eruch (known as Meher Baba’s ‘right hand man’), to visit various holy sites across India.

Don had with him a small  movie camera that a friend had insisted he take to India, with this he took the short film showing all of the spiritual sites he visited on this trip with Eruch.

At the time Don had no inkling as to why Baba had sent him to these places.  A revelation came some years later, after Baba ‘dropped His body’  in 1969……

“ One day out of the blue I had a telephone call from Eruch telling me that he had finally seen the video-cassettes showing the places Baba had me film, and that Eruch was surprised to find that the filmed sites were identical with places Baba had asked Eruch to take him to, repeatedly and anonymously. …….now for the first time after all these years, he had discovered that they were identical to the places Baba visited repeatedly with Eruch and never explained to Eruch why he had done this so many times, never telling even the closest mandali a word about the visits. Always, when Baba arrived with Eruch, Baba would go, Eruch said, into a profound meditation for some time. Then, when he had finished, without any discussion they would leave and return home. Eruch had never discussed this with anyone, but when he saw the identity with the places filmed by Don under instructions from Baba. Eruch realized that I had a right to know about the visits with Eruch.”

Don was eventually persuaded by his London Study Group, intrigued by this film and the places Meher Baba had sent him, to lead them in 2004, with more companions from France and America, on an extraordinary pilgrimage through India, to revisit these sites of great spiritual significance.

Don gives a wonderful account and ‘raison d’etre’ for these trips in his essay ‘Journeys to the Source’, from which the quotes, above and below, are taken.

This essay, originally intended by Don as a small publication, documents the spiritual sites he and fellow pilgrims visit, including, the remarkable Kailash Temple at Ellora, the exquisite Dilwara Jain Temple on Mount Abu in Rajasthan, The Sufi Shrine of Moinuddin Chisti in Ajmer, the impressive Maharashtrian Fort of Shivaji and a humble village mosque at Imamapur, where Meher Baba stayed with His Companions in The New Life. This pilgrimage with Don culminated with the group’s final destination; Meher Baba’s Samahdi in Meherabad.

It had occurred to Don whilst on this trip that, by his presence at these holy sites many years earlier, Meher Baba had imbibed each with a profound and powerful spiritual energy and significance, to the great benefit of future pilgrims.

On his return to London, Don was admitted to hospital with acute dehydration and salmonella poisoning. He again recounts;

“As I came out the hospital doors in London, it hit me suddenly and very clearly that what I was involved in was clearly the fulfilling of a statement made by Meher Baba to the London press in 1932, that he had not come into the world to start a new religion nor build cathedrals and such like, but to help revivify the world’s existing great religions, and to make their Truths more readily available to the sincere seeker after truth, and to gather the (warring) religions together like beads on one string.”

Inspired by this profound ‘intuition’ Don encouraged many others to accompany him on five more of these pilgrimages across India, the last remarkably in 2010 when Don was 91, enabling many to share this arduous, eventful and often profound spiritual journey. These pilgrimages have been documented in two films , firstly the unfinished film from the first pilgrimage in 2004 and also a film that was made of the pilgrimage in 2009,  described on the film website as …..’an unusual take on the road movie, Beads on One String takes the viewer on an extraordinary journey across India investigating mysticism, religion, and spirituality through the eyes of 50 pilgrims between the ages of 19 and 90.’ Beads On One String Documentary

In 2006, Don also led a European pilgrimage to France, Spain and Italy, once again travelling to places visited by Meher Baba; Marseille, Avila, Madrid, Barcelona, Assisi and Portofino. A journey that also included the Alhambra in Granada and the 12th Century Synagogue and Mezquita Mosque/ Cathedral in Cordoba. All architecturally beautiful and crucially marking the relative harmony between Muslims, Jews and Christians in 8th to 13th Century Andalusia.

Integral to this European ‘Beads on One String’ Pilgrimage was a seminar in Marseille, to include participants from different spiritual paths; Sufi, Christian, Zen Buddhist and Meher Baba devotees. Another seminar with similar intentions and broad spectrum was held in Berlin (2010).  Don was now unfortunately too unwell to attend.

Before his death in 2011 Don assembled a steering committee, composed of key organisers from these spiritual study groups and pilgrimages, to work on establishing them for posterity. This was the framework for the emerging ‘Beads on One String Foundation’.

For all those that knew Don, as a wise, generous and tireless companion and mentor, his leaving was a tremendous loss. It is heartening to note that the work Don undertook internationally with many groups and individuals, including The Beads Foundation, continues to evolve and thrive; creatively exploring companionship and practical spirituality within daily life, whilst supporting humanity’s need to engage with Oneness and the Unity of all Life.

The Beads Foundation wishes to thank Laurent Weichberger for sharing some of the source material from his essay, “A Short Biography of Don Stevens”,  from an introduction to the book, ‘Three Snapshots of Reality’,  by Don E. Stevens, Companion Books (2014). Laurent is now in the process of writing the authorized biography of Don E Stevens, ‘An Almost Perfect Balance’’.